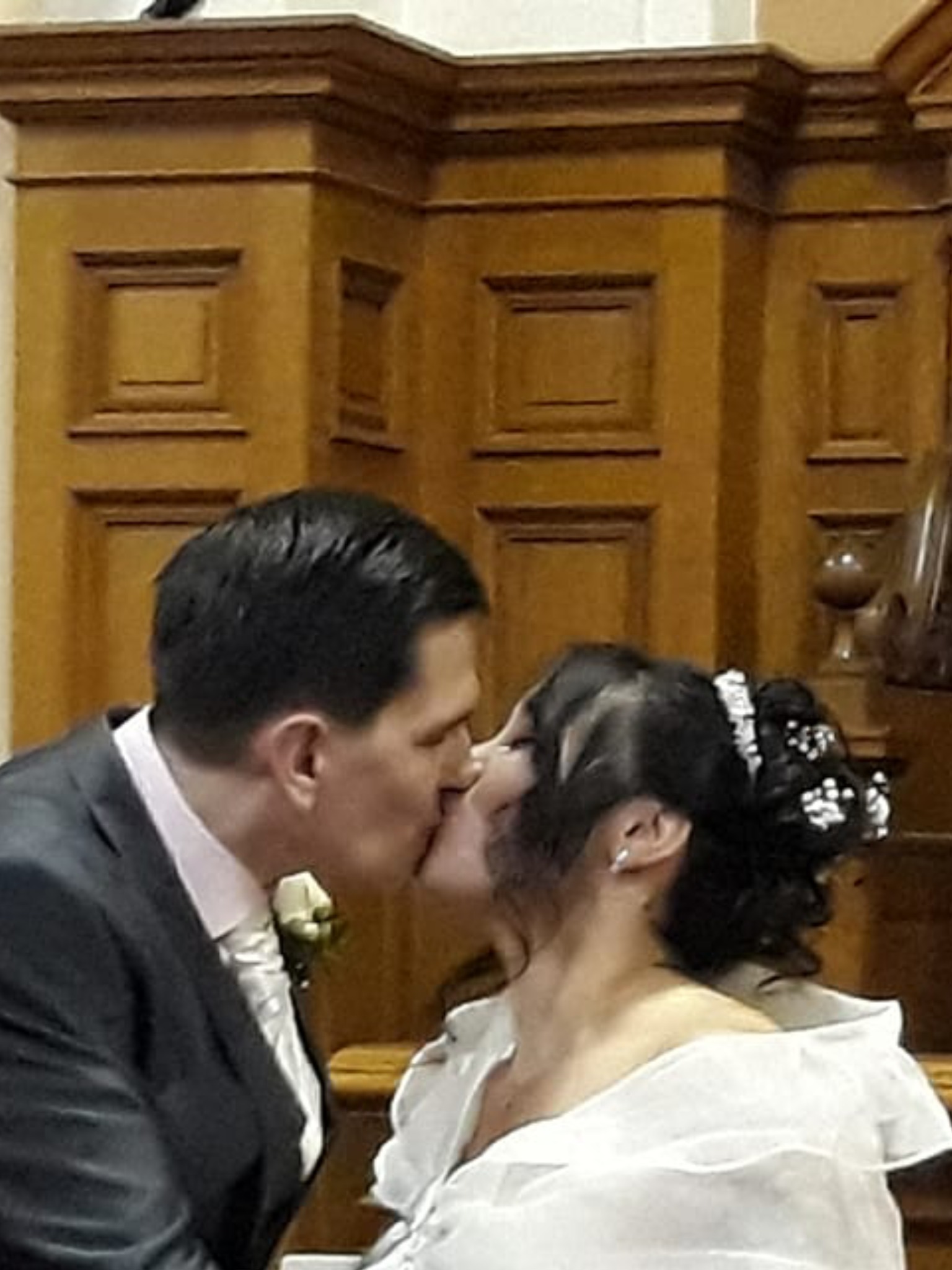 OUR WEDDING! Hi there readers I hope all are well, todays article is not about bulldogs I’m afraid but our very special wedding that I have Written about and we had this Friday November the second twenty eighteen (I’m writing the date everywhere helps to remember lol) it was a fantastic day.

We got married in Brighton councils actual chambers the semi circle ⭕️ of people didn’t put me off and I was more than ready to see my bride 👰 come from the door, when she did I have to admit I had a couple of tears where she looked so absolutely stunning.

I started out the day with tea and toast I was up early around nine so felt I could just relax the actual time of our marriage was 4-30 so I thought I had all the time in the world, it wasn’t until I was left sitting in Gas hairdressers at the top of st james street, I was thankful to the hairdressers eighty eight just down the road.

The barber was told to chop chop and I raced back home with new hair do but late for meeting people before hand, after getting ready I went down to the pre arranged pub and was bought a pint 🍺 I drunk this and went round to Brighton council (the wedding building) and was told I’m early THANK GOD I thought and slipped off for one more drink.

Time flies when your getting married

Its true we arranged this partly well mostly in hast due to debbies dad and he’s latar stages of onset  vascular dementia and was unable to give Debbie away, he has been currently more poorly so the fact he was in hospital during our day was bitter sweet.

Debbies dad was in our thoughts all day even though he couldn’t make it he was shown the event but the poor fella could not make head nor tail of the situation before him he doesn’t recognise whom he used too and it’s a shame we could not of got married earlier so he could of known at least one of he’s children has become wed.

Our mums made the wedding and reception I had not spoken to my own mum in years and debbies mum was so happy that she was getting married and after 23 years together definitely to the right man, I did my bit well and only a poking out shirt tail spoilt my part from being perfect. 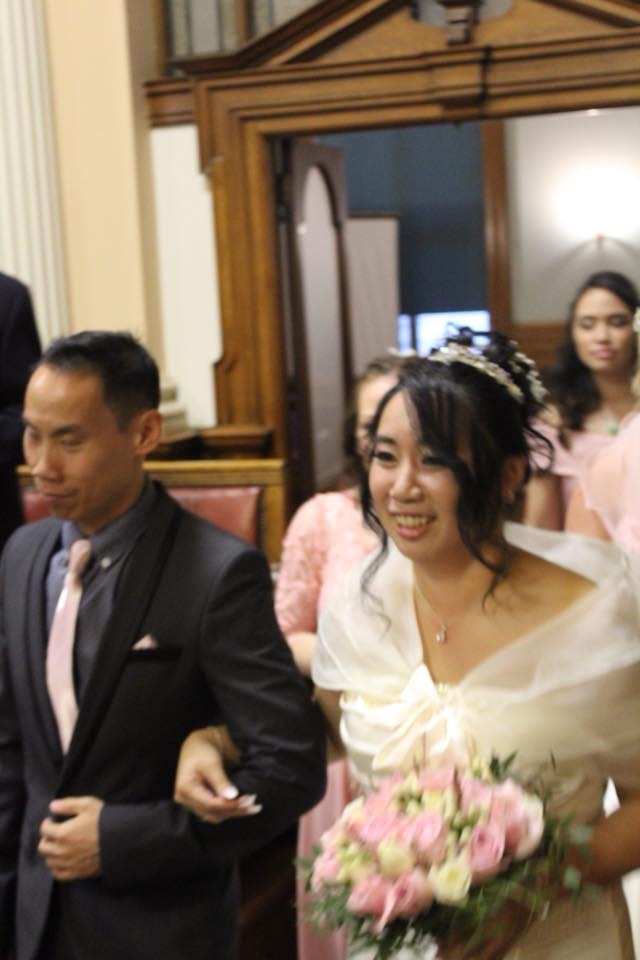 Debbie with her brother at our wedding

Ive titled this part but Debbie has graciously said she would create her own segment that I can turn into content as a new article or just update this with what she’s written, I want to say Debbie looked stunning her bridesmaids complimented her look and yes I got a tear or two in my eye.

After all those years together and yes I believe my wife to of always been naturally gorgeous but I was left speechless so I took her hand and kissed it instead, please make use of the youtube clips provided if you wish to watch the event. 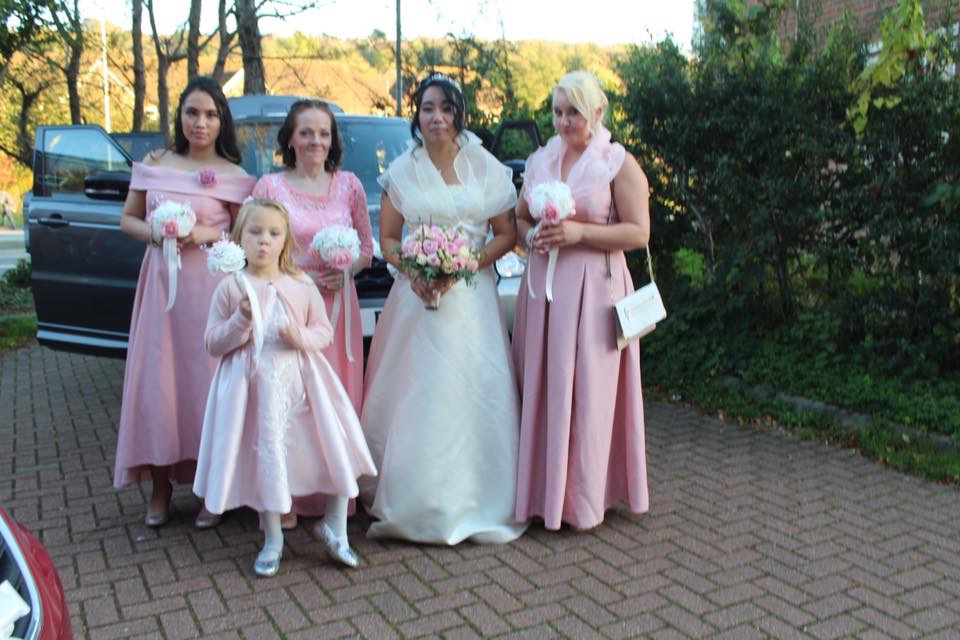 The weddings most beautiful ladies

Its true I had to walk to get married but debbies Entourage had posh rides to the weddingday but after it was  luxury to be driven with my new wife in beautiful Range Rover with bridesmaids following in another posh car 🚗, it was all hazy by then so I couldn’t make out the second car.

Chauffeur Driven out to the goldstone ex service mans club in hove we certainly arrived in style, I helped my new bride out thanked the chauffeur and took her through to what was a WOW in your face weddingevent that ladies from the bulldog community had sorted out it looked beautiful and thank you to ANGIE SHERWOOD WALKER and MELITA BRETT for all the effort put in. 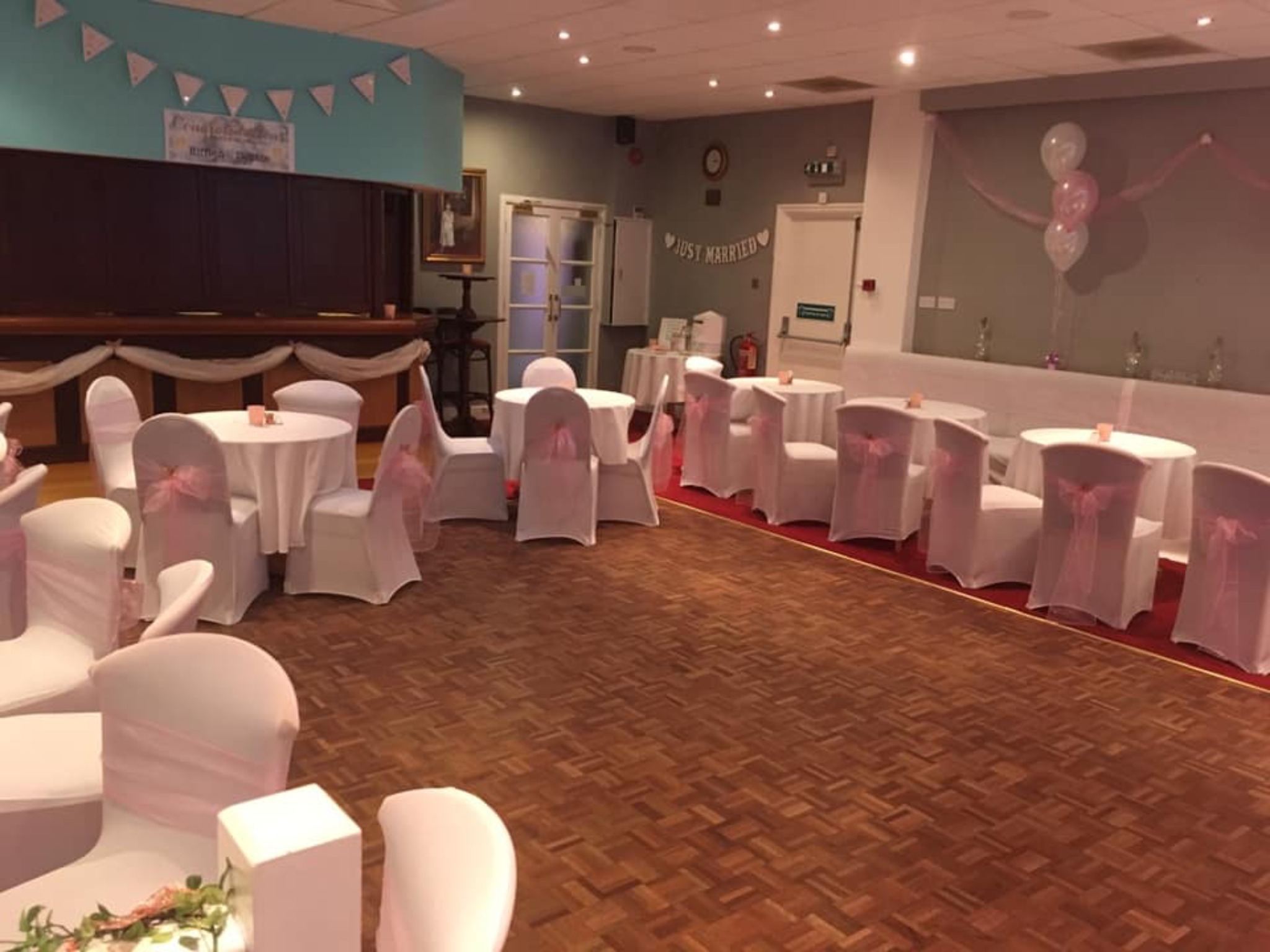 The goldstone club is available for events just get in contact

Ok I have promised a friend helene wheeler I would mention the club it was helene again from the bulldog community that came up with the idea to have the venue here, we had our own catering but otherwise it was all down to these ladies.

The details for this event venue are what I’ve been given to share and is correct at time of this blog article going out You can find their Facebook page here or Contact silver.fox61@live.co.uk or Goldstone club Shirley street hove Tel 01273 731572, I recommend this event venue the staff were friendly and helpful, the space is large and the DJ and drinks are very affordable too. 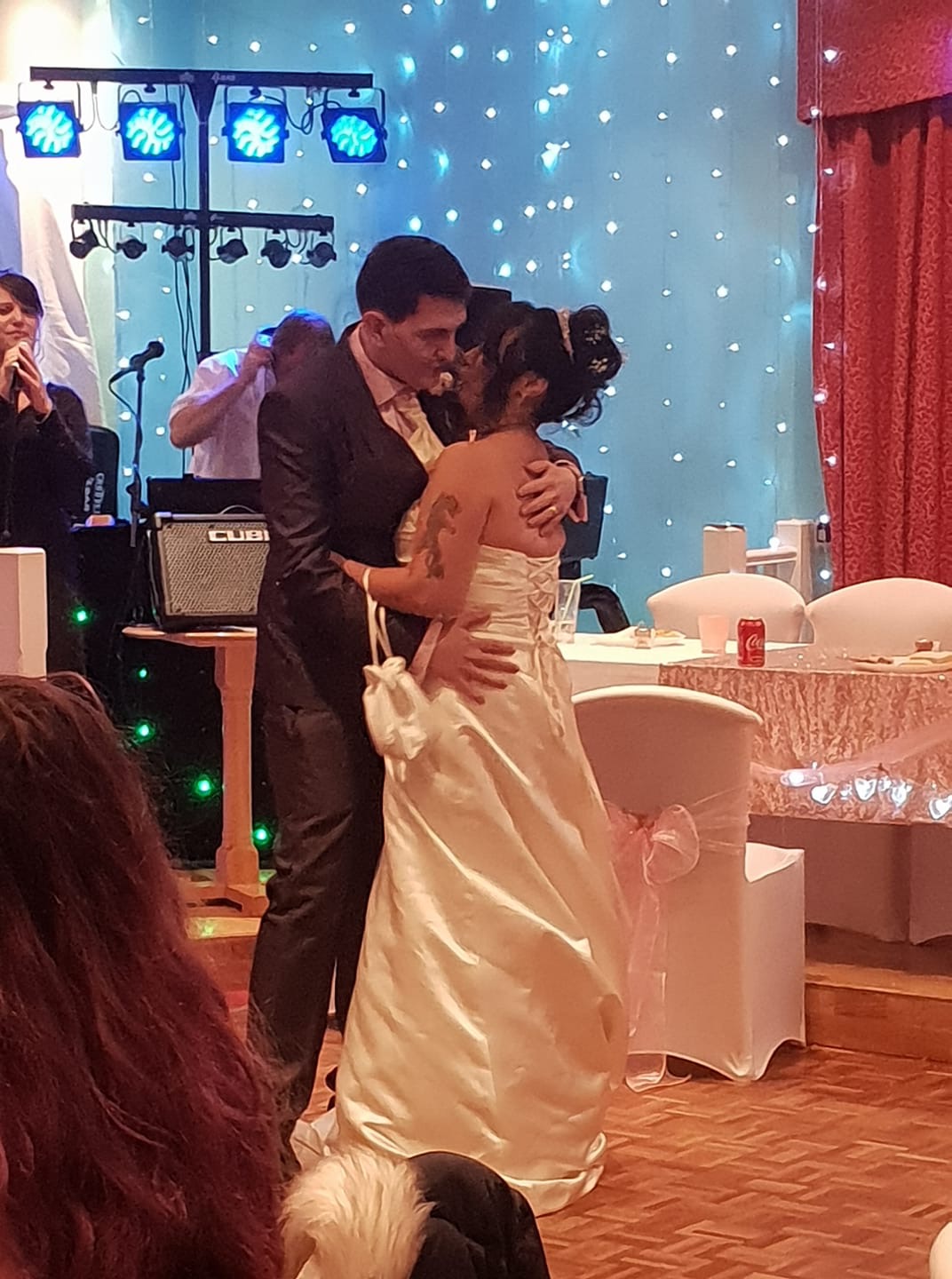 Our wedding day after 23 years

Fantastic as far as I remember lol I had the first dance with Debbie when the singer arrived we spoke a few words (just between us excuse me lol) and then both went around to thank our guests, I was bought way to many drinks and ended up drinking tea by the nights end.

If you read below you’ll see why we eventually went back to our home I do not quite remember this but do remember holding lots of bags gifts cards and debbies dress as she exited the car, with saying that can we thank all those that attended and gifted us we are both grateful and humbled by the generous nature of some.

That leaves the honeymoon

monies given to us will go towards a honeymoon thank you, we have not yet confirmed a destination A because the passport office needs to issue me with a passport and with debbies dad due out of hospital very soon but then having set backs means Debbie will want to be close which is understandable I did not want to come home myself but respect ✊ the situation.

Once we know debbies dads home with a care plan Debbie can sigh a bit of relief and leave her dad in capable hands so we can go away sometime, as someone whom has spent the last decade working on Collectibulldogs in so looking forward to a small break no offence.

Shoutout from the jive aces

Lastly and dedicated too with wife’s blessings

Thats Nov the second all wrapped up the wedding ring proves it lol, on a serious note quickly before I go and that’s to say this article is dedicated to debbies dad whom couldn’t be there and to my late father that never saw me grow up have children nor this special day so to both our dads I Tip my hat 🎩 and dedicate this article to you both.

I woke up around 5.00am,excited that it was my wedding day,managed to go back to sleep till 7.00am.I went downstairs at 8.00am and had a coffee with Nikki, one of my bridesmaids,I ate a croissant for breakfast.Waited till 10.00 for the hairdresser.
At 10.15 the hairdresser started doing the first bridesmaids hair,the transformation was starting,i was getting more excited,about half an hour later she started on herbmake up.Around this time the photographer turned up.The first bridesmaids hair and make was finished she looked amazing.
our daughter was next to have her hair and make up done.She had chosen to have her hair half up and half down with plaits.While  our daughter was having her hair and make up done my maid of honour and little bridesmaid arrived.The photographer was taking photos while the transformations were being done.
After  my daughter it was my little maids turn.She is only 7 but the hairdresser wanted her to look pretty so she put a little bit of make up on her then done her hair.
While  little maid was being transformed my witness was having an allergic reaction downstairs as the hairdressers children had bought in strawberries and she is allergic to them,I went to check on her,she didn’t look good,My witness said it would go she just needed to be away from them,I started panicking thinking she wouldn’t be able to make it,she was one of my witnesses.She recovered from it thankfully.
At this point my maid of honour was having her make up done,everyone looked so beautiful.
The bridesmaids started getting into there dresses at this point.
My daughters shoes were falling off her as they were too big,started panicking again thinking she would have to go in her trainers,luckily  my  friend had some insoles.
It was my turn to have hair and make up done.While I was having my hair done, the first bridesmaids called up to  her mum asking for a safety pin,I started panicking thinking had the straps on her dress snapped,had the zip broke,I couldn’t go and see as was having my hair done.It turned out that she found her dress to revealing and needed to attach the shawl to the front of it.
My hair and make up we’re done,tiara was in place,it was now time to get my dress on.I got one of my bridesmaids to help me as my dress was big and it was a basque back and needed to be pulled into it.While I was getting into my dress,the cars had arrived to take us to the registry office,I was thinking am I late,checked the time and it was fine.
Once I had my dress and shoes on,I grabbed my bouquet and headed outside to where the cars were,one was a Range Rover and the other car was a smaller Toyota,we had some photos done before getting into the cars.
We were on our way.
I was on a high as I had waited so long to marry my soulmate and it was eventually happening.
We arrived at the registry office at around 4:10pm,ceremony wasn’t till 4:30,I wondered if my hubby to be had arrived to sort out any last minute formality’s.I got my witness to phone him to find out where he was,he was in the pub and just leaving,I waited in the car as I didn’t want him to see me.I saw family and friends arriving to celebrate our wedding day.
It was now time to enter the registry office,the registrar was waiting to meet us,we had a little chat and then she took us upstairs to were everyone was waiting for us.
The ceremony was about to start,I was so happy,I’ve waited for this moment for so long,my big brother was giving me away due to dad being in hospital.We entered the ceremony room,I saw my hubby to be,thought he looked handsome all dolled up.
We sat down and let the registrar begin the ceremony,we exchanged vows,gave each other there rings,then we was pronounced husband and wife.We then had to sign our marriage certificate up on a high desk,it was then I saw everyone in the room and was so overwhelmed.Witnessess signed there names,guests took photos The ceremony was over and we was told to exit the council chambers room by the revolving doors,they was very small and I nearly got my dress stuck in it.
This led to a beautiful staircase where we was allowed to have our photos taken from.We got as many people as we could in our photos.
We then left the registry office and went by car to the reception venue.
Well what can I say,the reception venue had been decorated so beautifully,it was much nicer than I had expected.Guests bought drinks and tucked into the food,my singer arrived a little while later,she set up and started to sing,during one of her songs we had our first dance.
Our dance was over,I grabbed a drink started mingling,spoke to as many people as I could,saw the hubby every now and then he was propped up at the bar.Photos taken
The reception lasted several hours .
The day had been so amazing,I couldn’t have been any happier.
[icegram campaigns=”19035″]
[wdi_feed id=”2″]