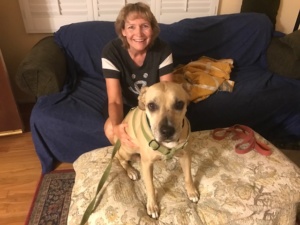 From something to chew on, writer Lori Wade, writer and blogger, lives in Los Angeles with her two rescue dogs, Xuma, a Pitbull mix, and Orson, a Labrador. She shares her passion for dogs on her blog at SomethingtoChewOn.dog. The blog includes tips and information about the care and training of dogs, humane education, and book reviews. Besides writing and cuddling with Xuma and Orson, Lori enjoys bicycling, hiking, and chocolate.

Something to chew on

Lori with her Xuma

When asked to write a guest blog, I debated about a topic! Collectibulldogs has a wonderful collection of bulldog artworks,ceramics,glass,and books,  Wiggles the CEO is a handsome bulldog and would serve well as a model for any new art.

Sinse this is about bulldogs writing about their history came to mind, but they were once bred to participate in a cruel sport that I would rather forget, bulldogs are these lovable,loyal,stocky, muscular creatures with a wrinkled face that is impossible to ignore and easy to adore.

Lori and her dogs from something to chew on

As I ponder my own bulldog experience I realise it is limited, at the dog park our Xuma became overly interested in a bulldog I believe Xuma mistook the raspy breathing as ominous rather than the result of the breeds short nose.

A non bulldog lover friend of mine (yes we are still friends)fell in love with Diesel a bulldogin her neighborhood.He was a handsome and sweet dog who made friends on his daily walks.Why did my non bulldog lover friend make an exception for Diesel?Why do we favour a certain breed over another ?Do we choose dogs similar to ourselves or are we attracted to a certain dog because she is different?

According to a November,2015 article on the BBC website we tend to pick dogs that mirror ourselves.When photos of dogs and their owners were taken at a dog park,people were often able to pair the dog with the owner.The results were not as reliable when the eyes were covered or when mixed breeds were involved.

However this seems to indicate that people pick dogs that resemble themselves.I am partial to black Labs.I love their size,warmth,intelligence and constant quest for food.When I met Brooke,our black Lab,she was huddled in a corner,an introvert seeking solace from the other dogs vying for attention.Shy,myself,in that moment I felt a kindred spirit and asked the shelter worker to meet her.

According to an article in the Huffington Post in September 2014,a study by Sadahiko Nakajima,a Japanese psychologist,has an 80 per cent success rate when people’s were asked to match photos of dogs and photos of their owners when both the dog and human eyes are visible.Otherwise the percentage of correct matches decreases rapidly.Nakajima theorised that people surround themselves with what is familiar. What that explains visual similarities,what about personality similarities.

Bulldogs have a reputation for being stubborn and lovers of tummy rubs.Are stubborn people who love to cuddle drawn to that breed?Are lazy people partial to Labs since they are easier to train?A veterinarian told me that she believes dogs take on their owners behaviours.She cited an example of clients screaming at one another in the exam room-it was no wonder that their dog was aggressive.A nervous owner may have a nervous dog.She said,your dog will tell me about your home life.However,sometimes a dogs behaviour or misbehaving has nothing to do with his humans.

we may never know why owners look like their dogs or have a similar personality my non – dog lover friend is in her 60s has a few wrinkles, she is petite yet solid so she may of fallen in love with Dissel because he is familiar to her, when describing Diesel she just said that he was ” great” perhaps it’s because bulldogs are irresistible.

Our ebooks are doing good want one and start yourself?