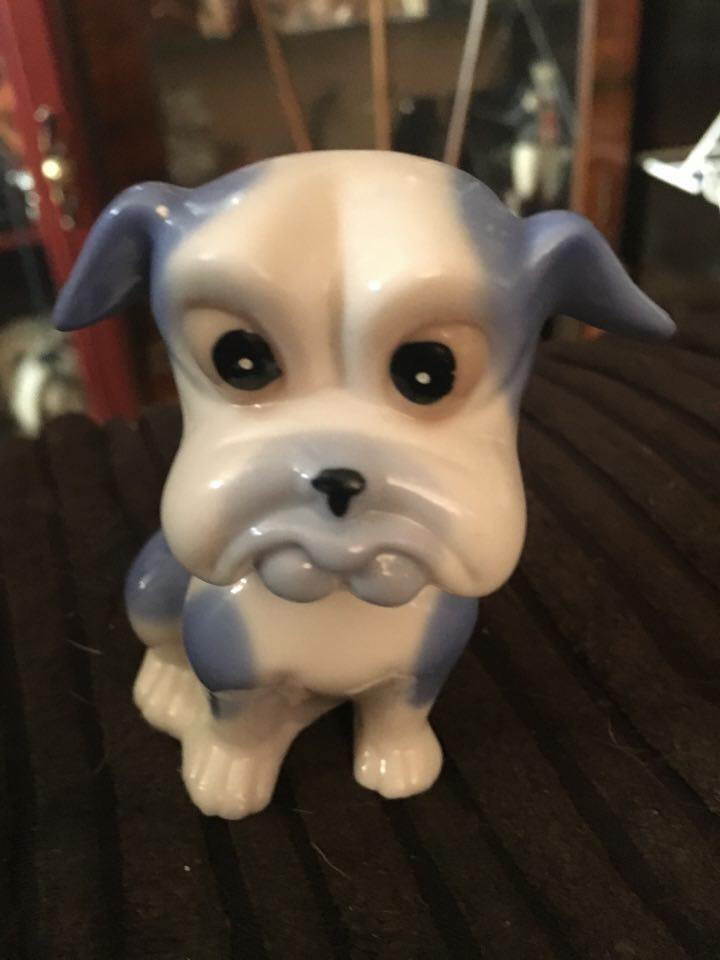 I was asked to write an article for Effion’s Blog My initial response was you can’t be serious.

But after much consideration, thought it may be fun.

First I have to put aside my own bias in collecting, as I like to collect more serious pieces that look like the British Bulldog.

After saying that I have observed the amazing amount of Bulldog Collectable that are far removed from my favourite pieces.

No other breed seems to be portrayed in the way Bulldogs have been.  Three that stand out to me are the Comical, The Exaggerated. And the absolutely Ridiculous.

Featured in Art works as playing Eight ball with other Breeds.  The prints of the Bulldog in the queue for the Toilet. The many post cards especially the British ones produced during the War Years, chasing a German Soldier and hanging of the seat of his pants.

The Exaggerated depictions seen with his short Legs contorted into the Queen Anne Cabriolet Legs.  His Teeth showing as if his Mouth could not possibly contain them. The Eyes made as big as Saucers usually crossed, or about to pop out onto the floor in front of you.

The Ridiculous I find hard to describe, but I am sure you can find them in the Dime stores or certainly printed on Tee Shirts.  Some times as Logos for Sporting Clubs.

So there is my take on just what I have observed whilst searching out Collectables. You very rarely see the Regal great Dane, or the Queens Corgis, or the shitzu, presented in the previously descriptions.

So that’s the Funny side of Collectables. So seriously my little effort at writing for the Blog is very much about the funny take on our loved Breed.

Am I being Serious probably not, Funny not that either.  Just my observation. Will I sign my Name.  Don’t be Funny. 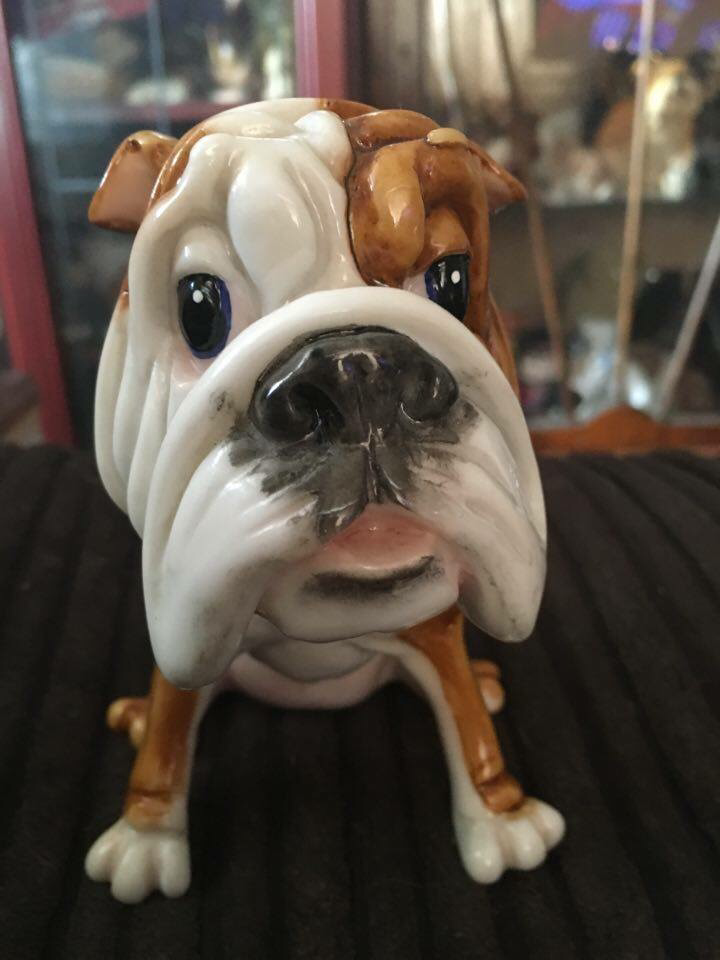 TAXIDERMI. THE STUFFING OF BULLDOG JOEY.

A RATHER STUFFY OUTDATED PROCEDURE THIS BIZARRE ALMOST CREEPY PRACTISE IS MOSTLY USED NOW DAYS TO PRESERVE AN ANIMAL KILLED BY THE HUNTERS OF WILD GAME  WHO LIKE TO DISPLAY THEIR TROPHY.

IN BYGONE YEARS THE GENTRY ALSO LIKED TO DISPLAY THEIR KILL. BIRDS, DEER AND EVEN FISH DECORATED THEIR WALLS OR STOOD ON PEDESTALS IN THEIR STATELY MANSIONS.

BULLDOG JOEY BORN 101 YEARS AGO IN 1915 . WAS THE MASCOT OF HER MAJESTY’S SERVICE DURING WORLD WAR ONE.  HE SERVED ON THE HMS RENOWN UNTIL THE SHIP WAS BADLY DAMAGED.  HE THEN BECAME THE MASCOT FOR ANOTHER SHIP THE HMS ELIZABETH.

WHEN JOEY DIED IN APRIL 1922 BECAUSE HE WAS LOVED SO MUCH BY THE SAILORS HIS BODY WAS STUFFED AND DISPLAYED IN A GLASS CASE AT THE VICTORY MUSEUM IN PORTS MOUTH.

THE DISPLAY DISAPPEARED FOR QUITE A WHILE AND THEN WAS DISCOVERED IN AN ANTIQUE SHOP.  HE WAS REFURBISHED BY THE SAME FIRM WHO DID THE ORIGINAL JOB.  HE WAS THEN TAKEN ABOARD THE VERY APTLY NAMED SHIP THE HMS BULLDOG.

JOEY CAME FROM THE KENNELS OF A MRS E MC KINLAY OF READING SHE WAS A LIFE LONG MEMBER OF THE LONDON BULLDOG SOCIETY.  JOEY WAS A FINE SPECIMEN OF THE BREED.  DESERVING OF HIS PLACE IN HISTORY.

Just a casual guest contributor. I wish you well in collecting, serious or the other. 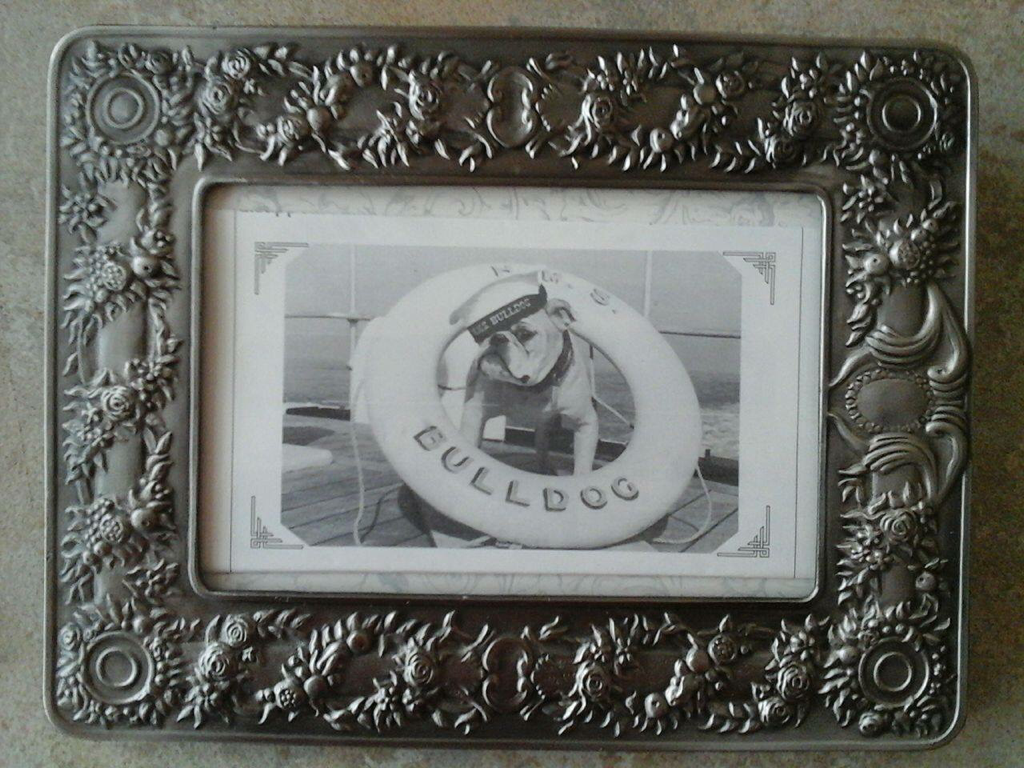 Please note neither myself or the Collectibulldogs team condone the shooting killing or hurting of any animal for sport or otherwise this piece was purely for informative use only.